Our guide to what you should try on your Christmas holiday to Finland, Norway & Denmark.

Nordic cuisine has become characterised recently as delicately served plates & rather minimalist servings, however, when it comes to the festive season, traditional heart stopping favourites and abundant smörgåsbord buffets come to the fore.

Warm glogg (mulled wine) is the highlight across the region from Estonia to Iceland. Non-alcoholic glogg made with cranberry & apple juices or the alcoholic version made with red wine are very popular at home as well as in the cafes & markets. Every one has their own particular spice concoction - these spices were traditionally added to make the red wine drinkable again (it often went bad).

In the home, hearty meals such as soups, stews, roasts and boiled vegetables with plenty of butter smeared on top are commonly served. If you are lucky, reindeer stew with brown cheese sauce, mashed potatoes & lingonberry might be your Norwegian Christmas dinner. Recognisable dishes such as Christmas hams with mustard, roast pork, salads & whole baked salmon fill the smörgåsbord. However, there are some dishes that you may not recognise served during the Scandinavian festive season and we recommend trying them whilst you are there.

Risalamande is a traditional Danish dessert typically served at Christmas. Risalamande was created in the last part of the 19th century and translates as rice served in the style of almonds. It is made out of rice pudding mixed with whipped cream, vanilla, and chopped almonds; and is usually served cold with a cherry sauce (kirsebærsauce). You will find contemporary versions of Risalamande decorated with delicate flowers & sprinkled with spices.

It is very common to make a large batch of rice pudding for dinner on Lillejuleaften ("Little Christmas Eve", i.e. December 23), a part of which is kept until Christmas Eve and used to make risalamande, which is eaten as dessert after the big Christmas dinner. 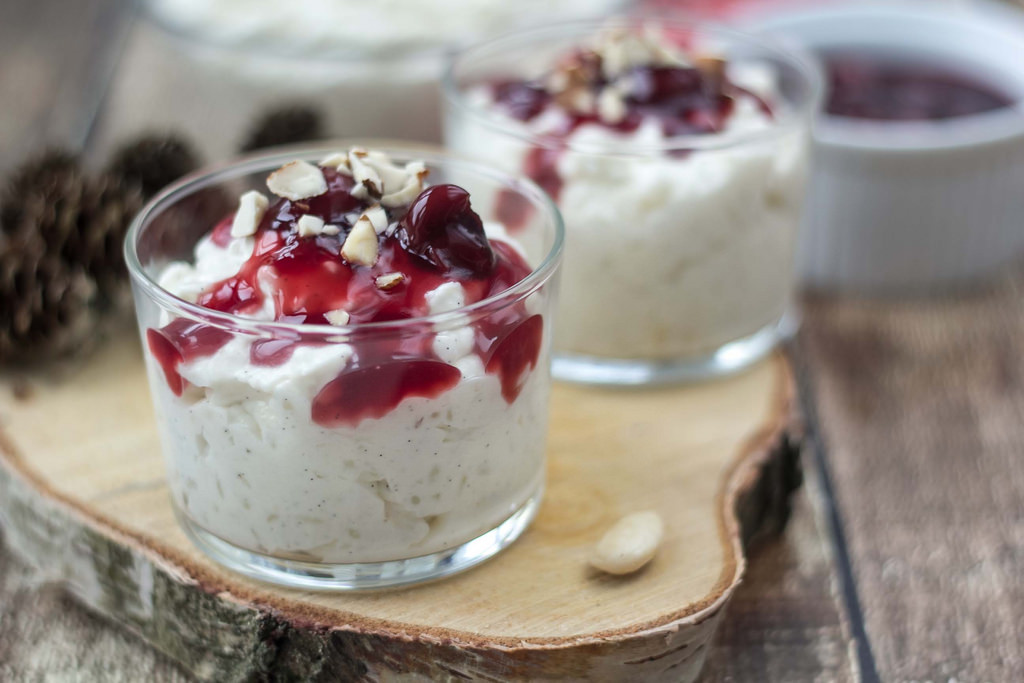 Æbleskiver is another Danish Christmas speciality. These small ball-like pancakes are similar to the Dutch poffertjes. Their Danish name translates as apple slices but don't search too hard for the apple, there isn't any inside. Served with icing sugar over them, look out for them at the Christmas markets.

Keep an eye out for Danish sugar coated potatoes served as a side dish for Christmas -  be sure to get your fair share!

Simply put: Joulutorttu! Basically butter pastry with plum jam in the middle. A word of warning though from Satu, our Finnish Nordic manager - you can eat way too many of these in one go so take care!

Some other Finnish Christmas favourites are warm smoked salmon and herrings or cold gravlax served with mustard dressing. The good old traditional dishes appear on the Finnish Christmas dining table year after year. Casserole dishes, Finnish cuisine at its best, will be served during your stay. Keep an eye out for Asko's favourites; the liver casserole, the carrot casserole and the swede (Rutabaga) casserole. Finally, vegetarians are catered for as well.

NOTE: the Finnish word for swede is LANTTU if you are searching around for this on the Joulupöytä (banquet).

Finns come up with quirky Christmas dishes - be on the look out for heavily stylised Rosolli salad, mixed fruit soup & garlic soup. Looking for Finnish Christmas recipes - check out this spot.

O.K. - so here is a word of warning. The Norwegians generally serve pretty typical Christmas dishes, similar to dishes already noted above BUT they do have a few peculiar ones. Remembering that until the oil boom of the '70's Norway was a poor farming country, some of the traditional Christmas dishes come from a time when peasant food was served using all the meat from the animal. One such dish to try is Pinnekjøtt, a cured rack of lamb steamed. It is smoked over birch as well and its flavour is something you may not have tried before.

Another festive specialty dish is the unusual and not for the faint-hearted smalahove, which is made from a sheep’s head. Originally associated with lower classes in Norwegian society, and more commonly eaten in western parts of Norway, it has now gained popularity among many Norwegians. In order to create this dish, the skin and the fleece of the sheep’s head must first be torched. After that, the brain is removed, the head seasoned with salted and then air-dried. Sometimes, the brain is left inside the head, and is cooked along with the meat. The brain is then eaten with a spoon or fried separately. If the brain is removed, the prepared head is then boiled until cooked, and is served with mashed potatoes or rutabaga (swede).