Get to know Copenhagen on a food tour

Alice is passionate about innovative Danish food & her home country - read her account as she explores Copenhagen on a food tour.

Do you know who built the vast majority, if not all, of the landmarks in Copenhagen, had all the kids and drank all the beer? I can give you the answer, but that would not be much fun, so I suggest you go on the Copenhagen Culinary Experience Tour and find out.

I did not want to leave my comfortable bed and the charming Kokkedal Castle, but I had to be by Torvehallerne for the Danish food tour starting at 10am.

I was lucky to catch the express train again, which allowed me a bit of extra time to check out the new market place - Torvehallerne in central Copenhagen prior to the tour. I could hardly wait to get a taste of Copenhagen.

Maria from Foodtours also arrived early and she was not hard to spot with her blue Foodtour jacket. We were 10 people attending the tour this morning and fortunately I was not the only solo traveller on the tour.

Maria kicked off the tour with listing events in Copenhagen this weekend and after a brief history lesson on Danish food and its development, off we went for our first stop. Arla, the dairy pioneer of Denmark (Aarhus to be exact:-) and are the makers of Lurpak and Castello that we find in on our supermarkets shelves here.

We then moved on to Bornholmer butikken (shop). Bornholm is a gorgeous Danish island in the Baltic Sea. They sell produce only from Bornholm, such as jams, relish, crackers including the Lakritz by Johan Bulow – a favourite of mine. 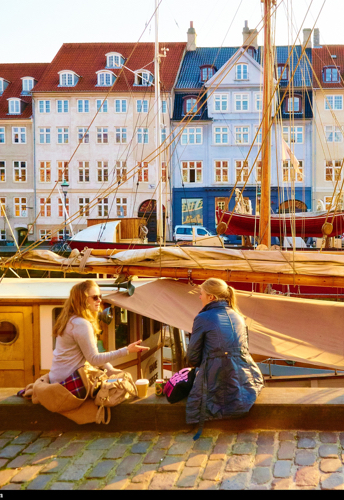 We then left the markets to take a stroll through the botanical gardens, and although one of my fellow peers was hoping that we would end up at Noma, we ended up somewhere that could be quite comparable in terms of being the best. Aamanns. Adam Aamann, who re-created and brought back Danish open-faced sandwiches or smørebrød as they are called in Danish. Beautiful creations using only the best and local organic ingredients, almost everything is made in house.

We were thirsty after the delicious meal and after a walk along the lakes, it was lucky that the next stop was Nørrebro Bryghus - the first microbrewery to open up in Denmark. Although we cannot count all their beers on our fingers, we did get to try the first one they ever made, the New York lager. We also tasted from Latvia with love and Much ado about hoping and there was also a Woulda Coulda Shoulda been an Ale – gotta’ love the names of the beers. What is a Danish Foodtour without a hotdog? Well, not a Danish Foodtour. This was not like any hotdog I had ever had - this was the Porsche version. I had the classic roasted hot dog with all the trimmings and I choose the goat sausage, which had won an award and boy did it deliver. The bread was dark sourdough and all the trimmings and sausages were homemade and organic. What a delight! Naturally we had to end the tour with something sweet. We went back to where we started – Torvehallerne and tasted a Danish flødebolle, which is this yummy marsh mellowy cream on a marzipan base covered in dark chocolate. It is also traditionally what we bring to our school or work mates for our birthdays. Summerbird - another favourite of mine only serve up the organic version. They also have a wide variety of other sweet treats such as chocolate covered almonds with different flavours such as liquorice (which should not come as a surprise) and strawberry.

To sum up, an amazing tour that gives you insight to Denmark’s history, Copenhagen famous sights, great New Nordic food and some surprises along the way.

Maria is enthusiastic, funny and has a wealth of knowledge that she is more than happy to share with you.

Food tours have just launched a new tour called the liquorish tour, so if you love liquorice like us here at the 50 Degrees North office or want to learn to love it, please ask us for more details. I have also heard talks of another new tour in the making, I can only tell you that if you have a sweet tooth this will be a tour for you. Watch this space! News
Just got back from...
DenmarkNordic Capitals